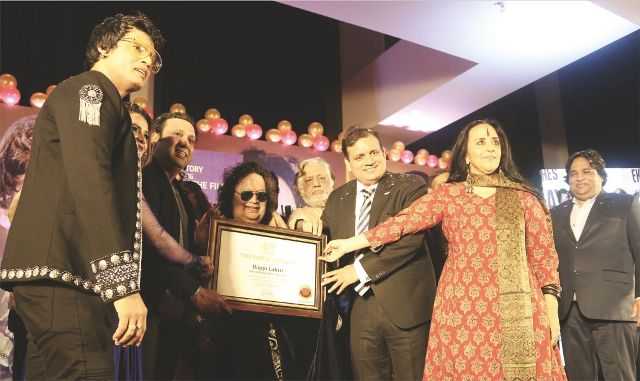 MUMBAI : Legendary music composer and singer Shri Bappi Lahiri has celebrated his 66th birthday in Mumbai (Maharashtra) India along with his family members and Bollywood stars singers including Jeetendra, Shatrughan Sinha, Govinda, Pahlaj Nihalani, Ila Arun, Alka Yagnik and others were present. On this occasion, Shri Santosh Shukla (President, World Book of Records, London & Supreme Court Advocate, India), Ms. Ashima Sharma and Dr. Rajeev Shrivastav graced the function and congratulated Shri Bappi Lahiri. Significantly, Bappi Da, as he is fondly called, has sung songs for Amitabh Bachchan, his son Abhishek, Dev and Sunil Anand, Dharmendra and his sons Sunny Deol, Sunil Dutt and his son Sanjay Dutt. After Dharmendra and Sunny Deol, he now wants to sing for Karan Deol. Born in a family passionate about music, Bengali singer Shri Aparesh Lahiri was his dad and musician-singer Smt. Bansari Lahiri was his mom. His first Hindi film was Nanha Shikari (1973), but the film that established him in Bollywood was Tahir Husain’s Zakhmee (1975). He did playback and composed music for the film. He has been the pioneer of disco beats in India and his refreshing, vibrant and rhythmic music had the entire nation dancing for decades. Bappi Da is widely known as the “Disco King” in India, even today. The veteran singer-composer, who has given music to more than 650 films in an over four decade-long career, has lent his voice for two generations of actors in Bollywood and continues to woo fans with his foot-tapping music.