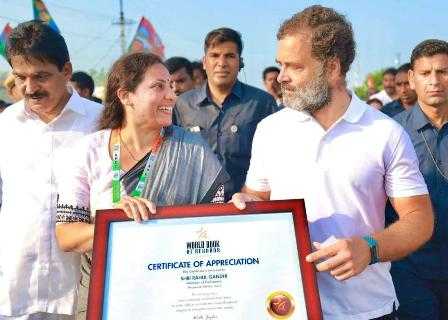 For promoting the cause of national integrity to strengthen democratic values.

Bengaluru: Barrister Santosh Shukla  (President and CEO, World Book of Record) has said that Shri Rahul Gandhi, Member of Parliament, India carried out a mass campaign as Bharat Jodo Yatra to promote the cause of national integrity to strengthen democratic values.

The certificate of Appreciation of the World Book of Records was presented to Shri Rahul Gandhi by Ms. Vasantha Kavitha (The official of WBR). On this occasion, various prominent personalities and dignitaries were present.

Significantly, Bharat Jodo Yatra has been having a great impact since its inception. The aim of this Yatra is to unite India; to come together and strengthen our nation. The Yatra began on 7th September from Kanyakumari and will pass through 12 states, culminating in Jammu and Kashmir – spanning a distance of 3,570 Km over the course of 150 days. The yatra has already received an overwhelming response; lakhs of people accompanied by Congress leaders have joined the movement to raise their voices against the economic, social and political issues that are dividing our nation today. The yatra seeks to address rampant unemployment & inflation, the politics of hate and division and the over-centralization of our political system. People from all walks of life are coming together to be a part of this historic movement. It is a celebration of India’s unity, cultural diversity and the incredible fortitude of its people.